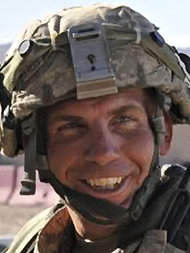 Bales, a 38-year-old married father of two who enlisted in the months after the Sept. 11, 2001, attacks, was flown Friday to a military prison at Fort Leavenworth, Kan., to await possible criminal charges, according to a U.S. Army statement.

Bales is accused of leaving his base in the Panjwai district of Kandahar province; shooting 16 people, including nine children; and attempting to burn their bodies before returning to the base and turning himself in. He could face the death penalty, military officials have said.

The incident has sparked significant backlash in Afghanistan, straining already difficult relations with the United States over conduct of the war there.

The suspect’s name had been a closely kept secret since he allegedly surrendered to authorities after the shootings on Sunday morning. Officials confirmed his name after news organizations began reporting it Friday evening.

This entry was posted in Afghanistan, Supporting US Troops, US TROOPS and tagged afghan shooting, deployments, US Soldier. Bookmark the permalink.