PENTAGON TO ANSWER FOR DEATH OF NAVY SEALS

As news comes from the White House of another election year withdrawal of all American troops from Afghanistan, which promises to leave the region in the same kind of terrorist run chaos as Iraq, a House Sub-Committee on Government Oversight of National Security is set to grill Pentagon officials on the single largest loss of SEAL lives in history.

The Committee says the hearing is to “honor the heroes of Extortion 17.” But the families of those heroes have a very different interest in that hearing. They are not going to the hearing to listen to empty platitudes about the wrongful death of their loved one’s…

The families of the fallen SEALs want answers… North American Law Center submitted official questions to members of the House Sub-Committee more than 24 hours before the hearing, on behalf of Billy and Karen Vaughn, parents of Navy SEAL Aaron Vaughn.

The hearing has received almost NO press coverage to date.

Billy Vaughn, Aaron’s father, released an explosive book titled Betrayed about his son and the circumstances surrounding the death of his son on 6 August, 2011 in Afghanistan. The mission was code named “Lefty Grove” and the CH47 was call sign Extortion 17.

The tragic event marks the single largest loss of life in Navy SEAL and Special Forces history, and it was allowed to happen as a direct result of Administration policies, a lack of mission readiness, and suicidal ROE (Rules of Engagement) which adds considerable threat to our brave young men and women ordered into harm’s way.

A list of initial questions was delivered to committee members more than 24 hours ahead of the hearing. Despite a history of do-nothing dog and pony shows by the Issa controlled committee, on matters like Benghazi, the SEAL families intend to do whatever it takes to get answers.

Because this committee is on Oversight of National Security, members of the committee must accept calls from Americans all over the country and Billy and Karen Vaughn have asked for everyone to make those calls in an effort to assure that these families will get answers to their questions.

These Representatives need to hear from the American people or this hearing will become just another “Benghazi” effort to sweep Administration failings under the political carpet.

This is NOT a partisan issue. It is not just important to these SEAL families. The story of betrayal of our armed forces is critical to every military family, especially all who have loved ones in harm’s way. We still have soldiers dying under insane Administration policies and they will continue to needlessly die until this matter is fully addressed and people are held accountable.

At 10:00 am ET February 27, 2014… after two and a half years of waiting for answers, SEAL families will sit in a Congressional hearing asking questions. Please help make sure that those questions are asked and answered.

Don’t sit this one out! If you support our brave troops, now is the time to stand with them!

‘I Didn’t Join to Be Sacrificed’: U.S. Troops Fed Up with Risky Afghanistan Strategy

Penned by Billy and Karen Vaughn

U.S. soldiers in Afghanistan are now forced to fight a two-fronted war. Before each deployment, these soldiers understand fully that day after day they will do battle against relentless terrorists with shifting loyalties and unspeakable hatred. But what none of them could have foreseen was the killing field that would open from their rear: the Continental United States.

Our government’s incessant tightening of already restrictive ROE (Rules of Engagement), compounded by the failed COIN (Counterinsurgency) strategy—also known as “winning hearts and minds”—has made an otherwise primitive enemy formidable.

Our best and brightest come home in body bags as politicians and lawyers dine over white linen tablecloths; writing, modifying, and re-modifying these lethal rules. Rules that favor the enemy rather than the American soldier. Rules so absurd they’re difficult to believe until you hear the same stories over and again from those returning from battle.

In a delicate discussion with an Army Ranger who recently left the military, we heard the following: “I had to get out. I have a family who needs me. I didn’t join to be sacrificed. I joined to fight.”

This decision came shortly after he lost a close friend to the ROE. He explained how the Taliban had attempted an ambush on his friend’s squad but quickly realized they were in a battle they couldn’t win and began retreating. While chasing them, the U.S. soldiers were ordered not to engage due to the slight chance the Taliban had laid down their arms as they ran through some type of shack. While arguing with leadership at the JOC (Joint Operations Center), his friend was shot and killed.

A Navy SEAL who left his job only a few years shy of full retirement said the following: “I got out because I couldn’t take it anymore. We tried to explain how much reckless danger we were being exposed to and they told us we were being illogical.”

This type of response has created a growing crisis of confidence between our warfighters and senior military leadership. His argument wasn’t illogical at all.

A gut-wrenching pattern began forming in early 2009, a pattern completely ignored by Congress, the White House, and apparently the DoD.

In the first seven plus years of war in Afghanistan (October 2001 – December 2008) we lost 630 U.S. soldiers. In early 2009, this administration authorized the implementation of the COIN strategy. Over the next five years, the U.S. death toll skyrocket to 2,292.

Seventy-three percent of all U.S. deaths in Afghanistan have taken place since 2009.

While concern over being killed due to these policies weighs heavily on the minds of those we’ve spoken with, the deepest pit in the stomach comes from fear of prosecution should they violate these absurd and ever-changing ROE. The last thing a warfighter should ever be forced to experience is unnecessary fear.

However, today’s warfighters have the grave misfortune of serving leaders who elevate the virtues of inaction over action. The message? If you dare use your training or your gut instinct, if you have the fortitude to fight for your life or the desire to kill the enemy, there is a good chance you will be punished.

The physiological capacities of a true patriot cannot tolerate the vile stench of injustice, especially when perpetrated against those who defend us. Its wretched aroma permeates the core and demands a response.

We’re counting on you, the American patriot, for that response. We must defend our defenders. Please, spread the news and demand change.

Billy & Karen Vaughn are Gold Star parents of Special Operations Chief (SEAL) Aaron Vaughn, KIA 6 Aug 2011. Billy is the author of Betrayed: The Shocking True Story of Extortion 17. Read more or schedule the Vaughns for a speaking event at http://www.forourson.us.

Elections: What Difference At This Point Does It Make

The State Department on Friday for the first time blamed specific groups and militants for the 2012 Benghazi attack, designating them as terrorists — a move that further undermines initial claims the attack was spontaneous.

The State Department also labeled as terrorists Sufian bin Qumu, head of the Darnah branch and a former Guantanamo Bay detainee, and Ahmed Abu Khattalah, head of the Benghazi branch.

Fox News previously reported that the two were suspected of playing a role in the attack. And despite State Department claims that Al Qaeda leadership was not involved and a recent news report echoing that assessment, Fox News has learned that bin Qumu has Al Qaeda ties.

According to his Guantanamo file, he has historic ties to the Al Qaeda network, including training at one point at “Usama bin Laden’s Torkham camp.”

The State Department, in its announcement Friday, specifically discussed allegations against the Ansar al-Sharia branches.

“Ansar al-Shari’a in Benghazi and Ansar al-Shari’a in Darnah have been involved in terrorist attacks against civilian targets, frequent assassinations, and attempted assassinations of security officials and political actors in eastern Libya, and the September 11, 2012 attacks against the U.S. Special Mission and Annex in Benghazi, Libya,” the department said. “Members of both organizations continue to pose a threat to U.S. interests in Libya.”

Shortly after the attack, administration officials indicated it was related to protests over an anti-Islam film that were raging elsewhere in Africa and the Middle East, describing it as spontaneous. They have since backed off that explanation, though have not ruled out the film as having played some role. Many lawmakers, though, have claimed the film was not a factor and the attack was planned by terrorists.

The department on Friday cited Khattalah and bin Qumu over their leadership roles in the al-Sharia organizations. Khattalah, though, told Fox News in October 2012 that while he was at the U.S. consulate that night, he was not responsible for the attack. He claimed he was helping Libyan security workers defending the compound.

The new terror designation bars anyone from providing or trying to provide “material support or resources” to those organizations and individuals, and freezes any assets they have in the U.S. The State Department announced that it has also updated its Rewards for Justice website to include a reward of up to $10 million for information leading to the arrest or conviction of anyone involved in the Benghazi attack.

The department had faced criticism for not including that reward on the website, though officials claimed reward offers had nevertheless been made.

Four Americans died in the 2012 attack, and so far nobody has been brought to justice in connection with the killings.

“The U.S. government is committed to taking all appropriate actions against the organizations and individuals responsible for the attacks against the U.S. diplomatic facilities in Libya and Tunisia,” the State Department said, also referring to a 2012 attack on the U.S. Embassy in Tunis.

watch video of news report at link above. 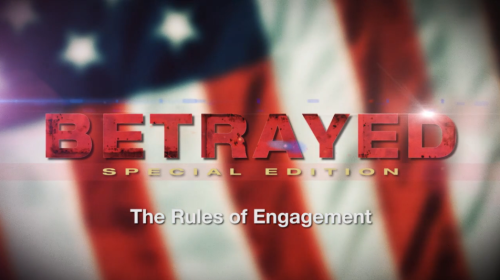 Betrayed 09 Rules of Engagement from Matthew Peevy on Vimeo.